The Lost City Trek in 4 days

Deep in the jungled mountains of the Sierra Nevada, you’ll
find Teyuna, or the Lost City (Cuidad Perdida), an ancient ruined city of the
Tayrona people that was built around 800 AD.

When the Spanish invaded Colombia, it caused great tension
and eventually led the Tayrona to move their settlements higher in the
mountains.  This allowed them to avoid
the Spanish rule and it also saved them from disease.  That said, the population dwindled and was
dispersed and eventually Teyuna was abandoned.

Then in the early 1970s, it was rediscovered and looted by
men who were hunting near the Buritaca River and discovered the mossy green
steps leading up a steep ridge.  While it
was open to the public after six years later, it wasn’t until 2005 that the
area was finally secured from rebel militants and drug traffickers, and now
today, the trail sees about 150 visitors a day during high season.

While we may refer to Teyuna as the Lost City, the locals would
say it was never lost.  In the villages
between the mountains, there are four groups of indigenous people that descend
from the Tayrona and have maintained their traditional way of life in the
emerald jungle: the Wiwa, Kogi, Arhuaco and Cancuamo.

We were mainly exposed to the Wiwa and Kogi groups on the
trail.  As we walked passed them, I was
always astonished to see how they would walk through the mountains barefoot
with ease.  They remained true to their culture;
living in huts with woodsmoke seeping through their thatched roofs and wearing
traditional white robes and colourful mochillas, or handwoven shoulder
bags.   There was very little
interaction, as most of the time, they avoided eye contact and stared mutely
like ghosts, not even acknowledging a hello. Their belief is based on Mother
Nature, and they believe that us outsiders, or Younger Brothers, are hurting
the Earth’s balance.   They consider
themselves to be the caretakers of the earth and live in harmony with the land,
taking only what is necessary. It’s no wonder why they are not friendlier
towards us.  When asked if they like the
tourism, they usually suggest that it is good if we go back to tell our
cultures about them and help inform the need for balance. 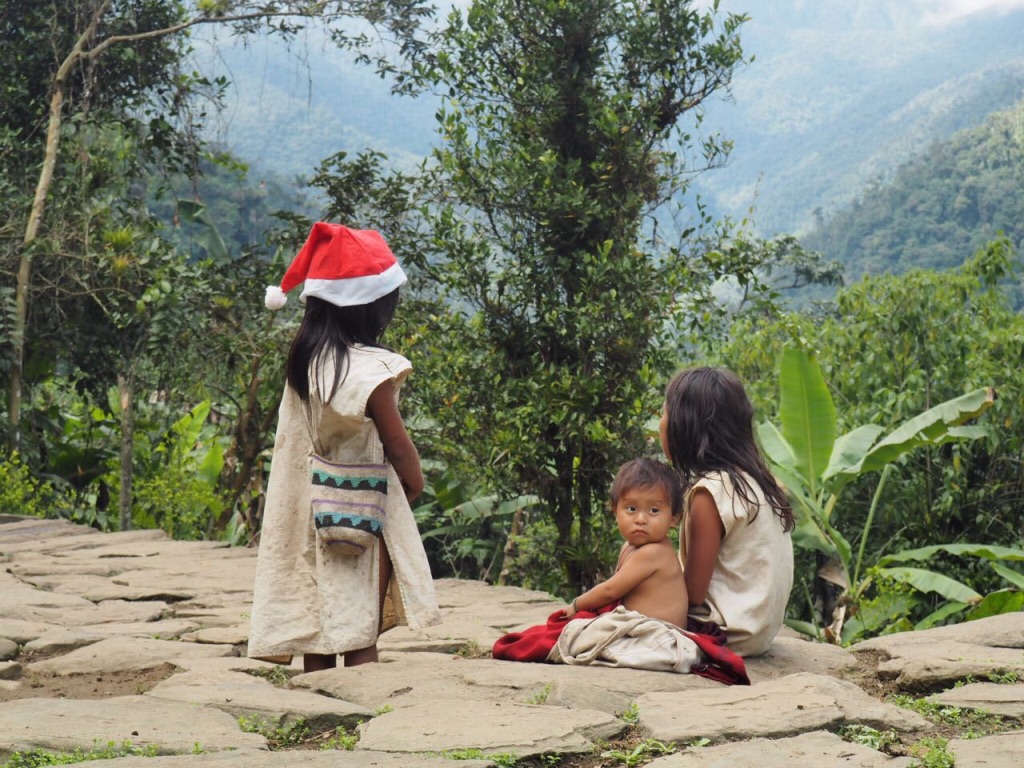 We started our journey from Santa Marta. We arrived in the
Magic Tours office, promptly at 9am as instructed, but then realised this
entire trip was going to be on Colombian time.
We were escorted to a waiting room at the back of the office and slowly,
others arrived, all looking anxious for what was ahead.

About an hour later, the 17 of us were introduced to our guides, Gabriel and
Nico, as well as our translator, Jesus, and the team of two who would be
cooking for us during the trip.  We then
jumped into two jeeps and set off.

After 2 hours of driving, we turned off-road and continued
the journey for another hour until we reached El Mamey (140m), a village in the
foothills of the Sierra Nevada. 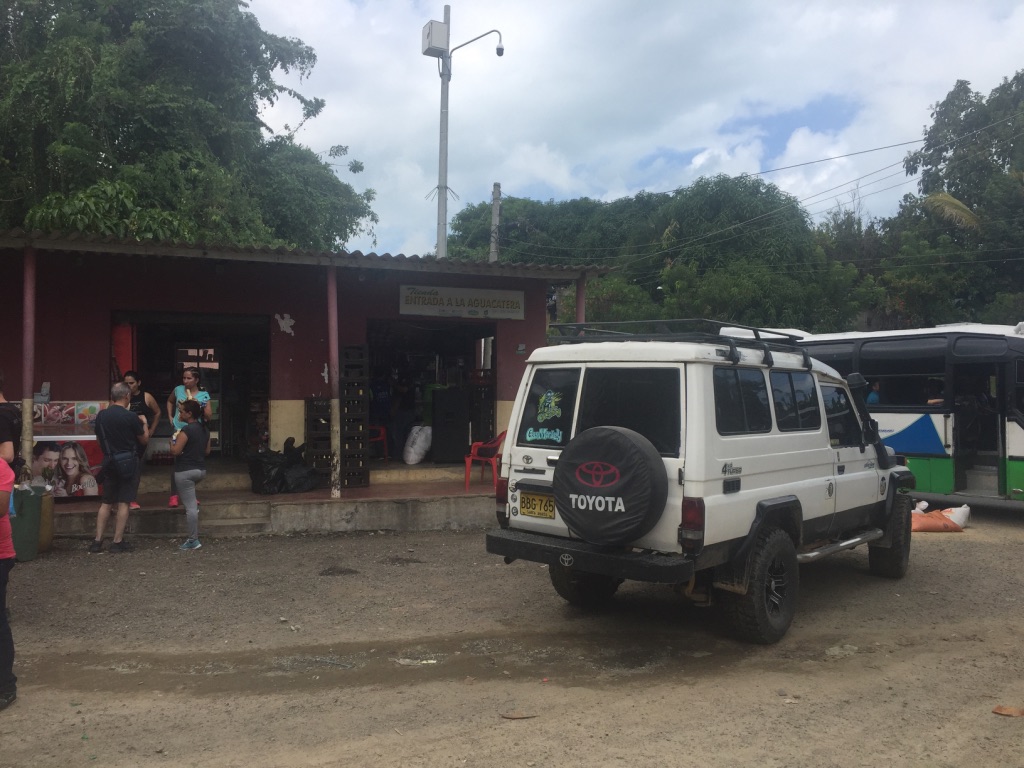 We were served lunch upon arrival, and then set off to ascend
up the mountain. 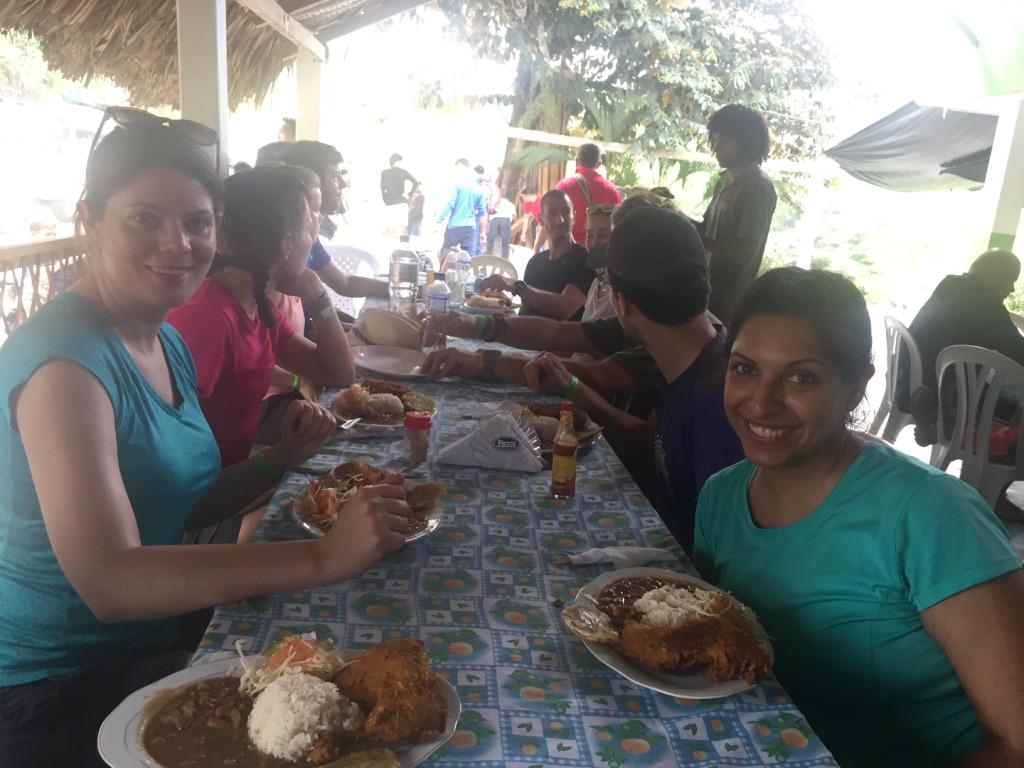 Within the first 15 minutes, we arrived at our first river
crossing.  This meant it was time to take
our boots off to make our way across the river, before continuing to climb to
720m. 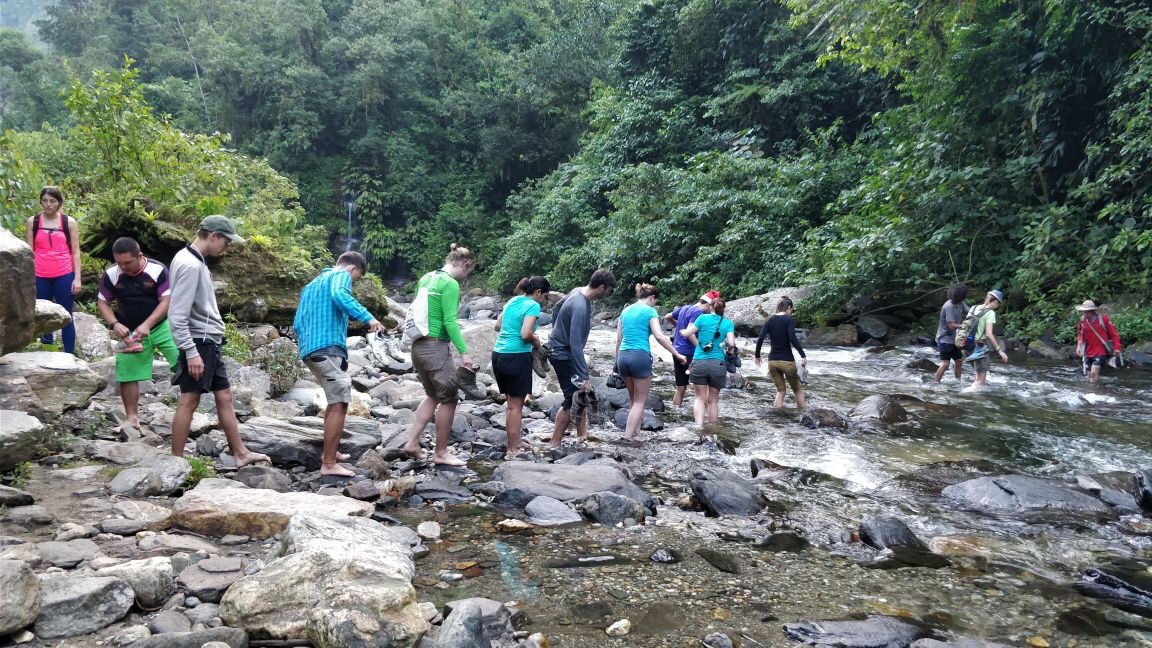 The climb felt difficult since it
was steep and pretty exposed to the afternoon sun, which was on top of the 30-degree
heat.  It did help that we made a stop
along the way for fresh orange juice, and we were rewarded again at the top
with a stunning view and a watermelon break. 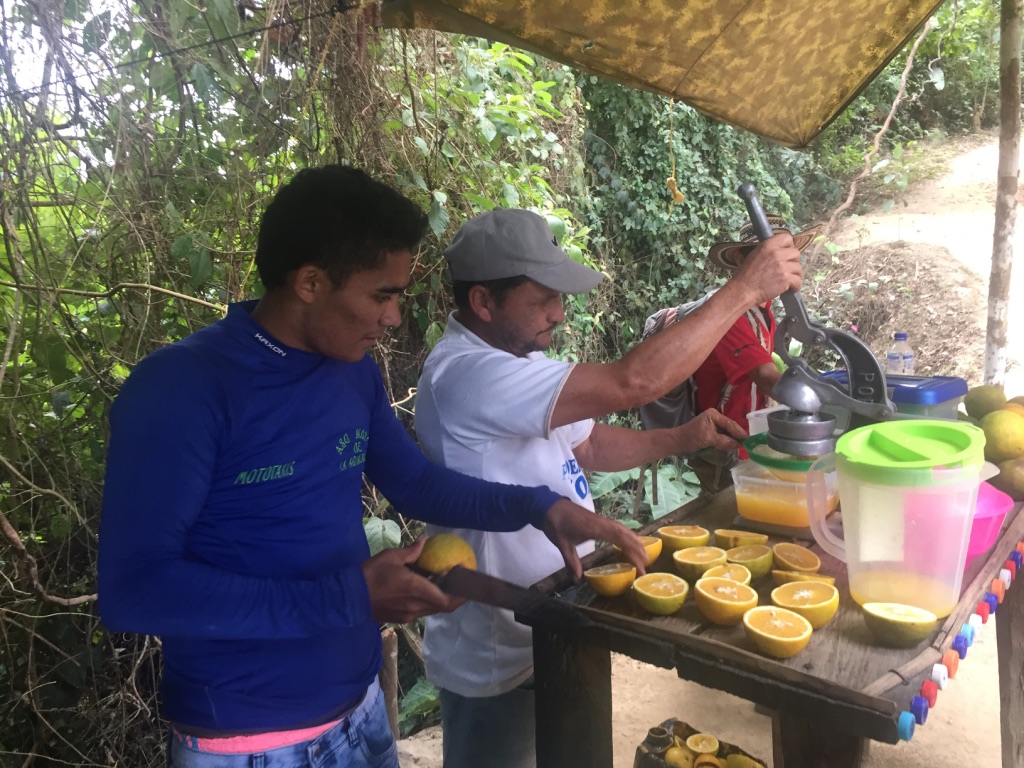 Once we enjoyed the view, we continued back down the
At this point, the trail
narrows to a single path through the forest.
Nico and Gabriel led us down the steep muddy track and across swiftly
flowing streams and into the forest, to arrive at our first camp, Casa Adan,
which was located at 450m.

We arrived a bit late (due to starting the day late) so
there was no time to swim in the river before sunset.  So instead, we showered, and then got ready
for our first dinner at camp. 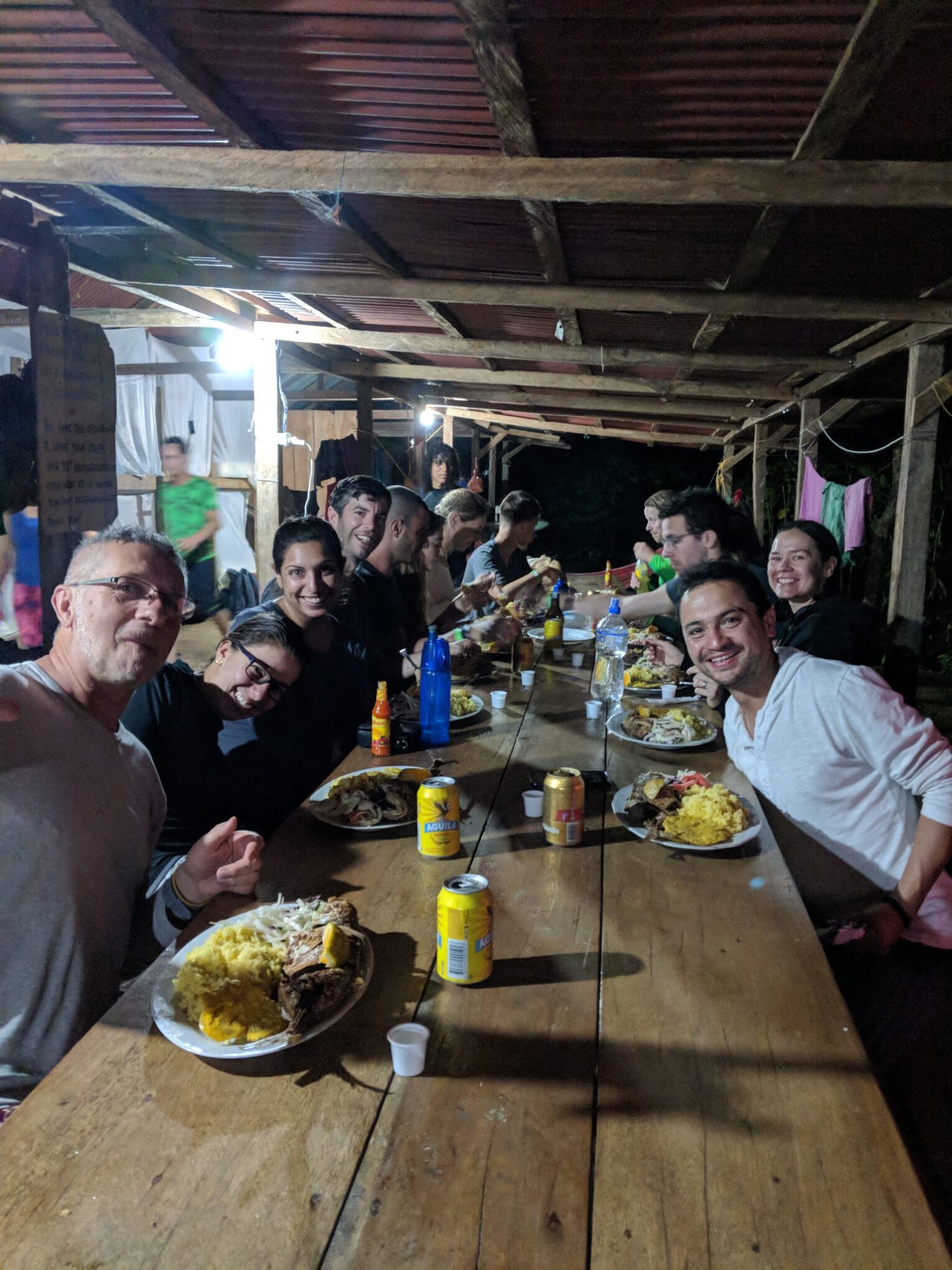 The camp itself was equipped with showers and toilets as
well as bunk beds and hammocks.  While there
was electricity in the campsite, we had officially entered a world with no
cars, internet or mobile phone signal.

The lights were switched on before the sun rose and we got
ready for our first full day of the trek.
We were fed a hearty breakfast and departed around 6:30.

The morning trek had our heart rate up from the start with a
brisk uphill climb. We continue for about three hours with a stop for watermelon and a
second stop at the Mutanzi village, where we got an introduction to the local
traditions.  Following that, it was
another 45 minutes until we arrived at our lunchtime campsite. 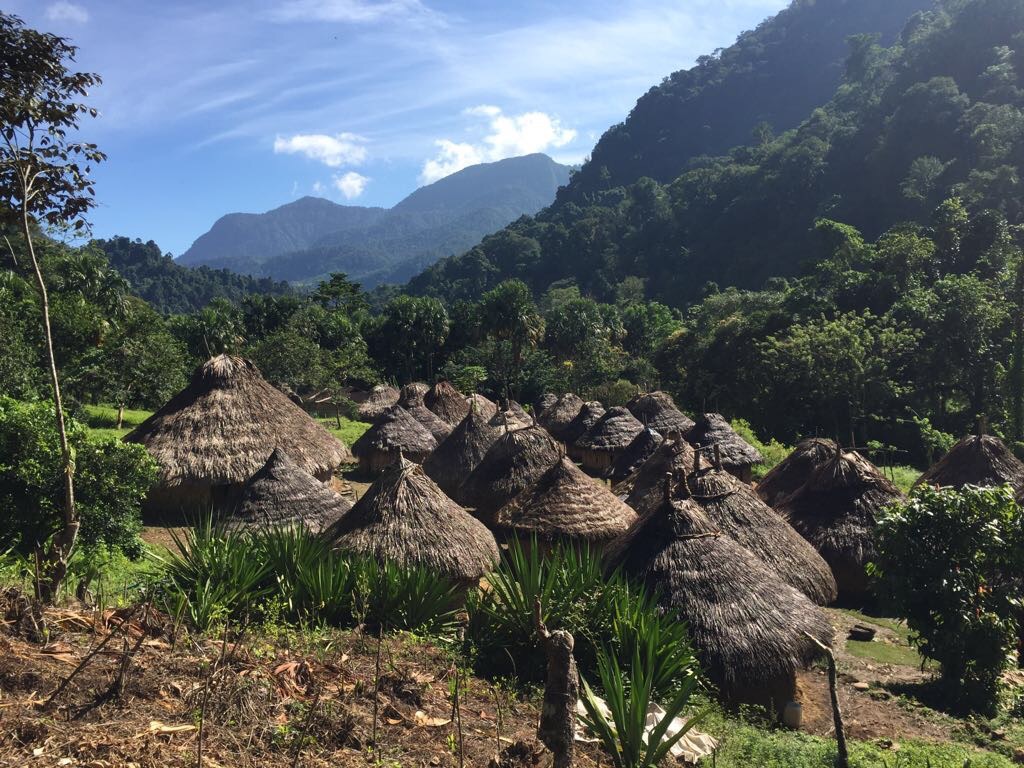 We arrived around 11:30, giving us enough time for a swim in
the river before lunch.  The cold water
was a nice feeling after the morning.  In
fact, it felt cleaner than taking a shower.
Following lunch, as much as it felt like it was time for a siesta, it
was actually time to set off for another 4 hours of arduous hiking.

We started off with a journey through the forest, across the
Buritca River, but then it was time to make our way to 800m, Camp Paraiso.  This was a tough climb but we were motivated
to get to the final camp before the Lost City. 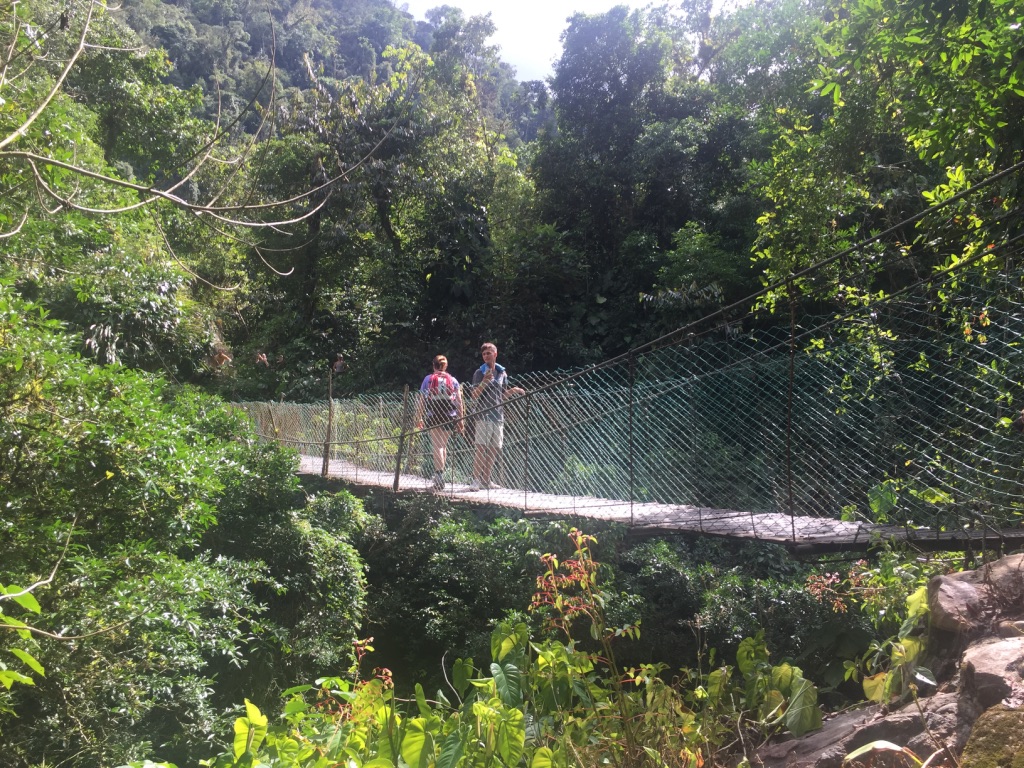 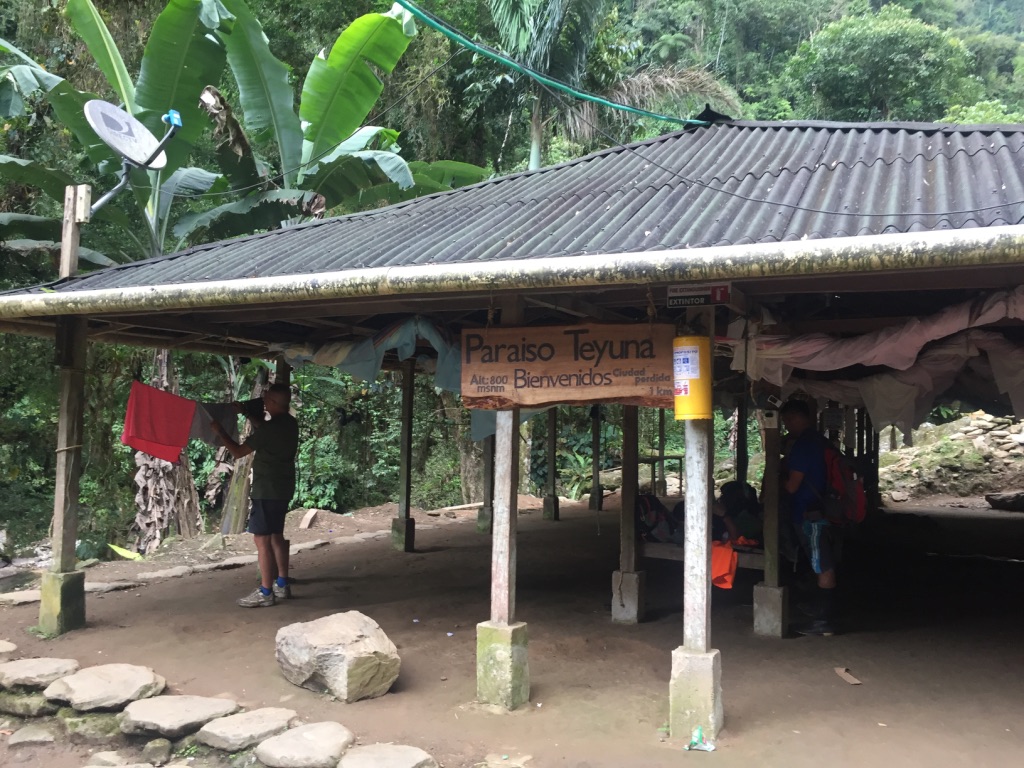 Given this was the last stop before the Teyuna, it was a
busy site.  There were many groups on the
site, all excited for what was ahead the next day.  We got to camp, this one having the cleanest
showers and bathrooms, and got cleaned up for dinner.  It was a big night – not only was it the day
before our visit to the Lost City, it was Christmas Eve!

We started our evening with popcorn and tea / coffee,
followed by Christmas Eve dinner and treats post dinner.  And of course, we ended the evening early, as
we were all tired and had a busy day ahead of us. 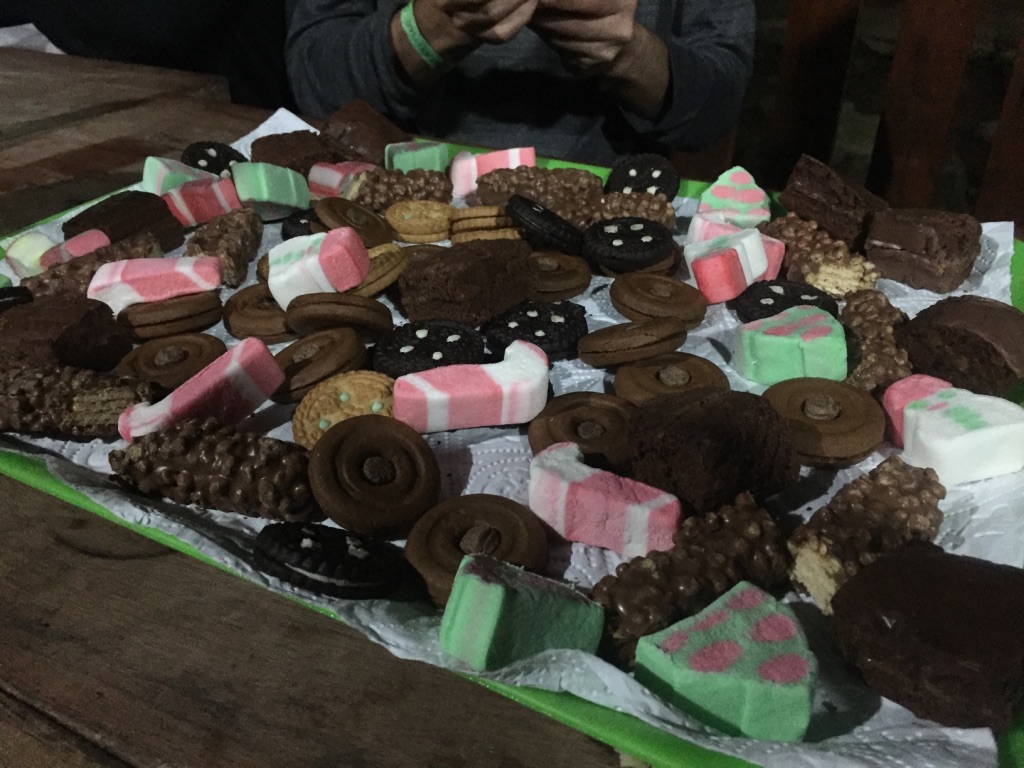 Once
again, we rose before the sun, waking up to the sound of the roosters.  After breakfast, we departed for the sacred
site.  After about an hour of walking, we
arrived at the steep moss covered steps.
I climbed the 1200 stairs slowly and in about an hour, arrived at the
first part of the 80-acre site. 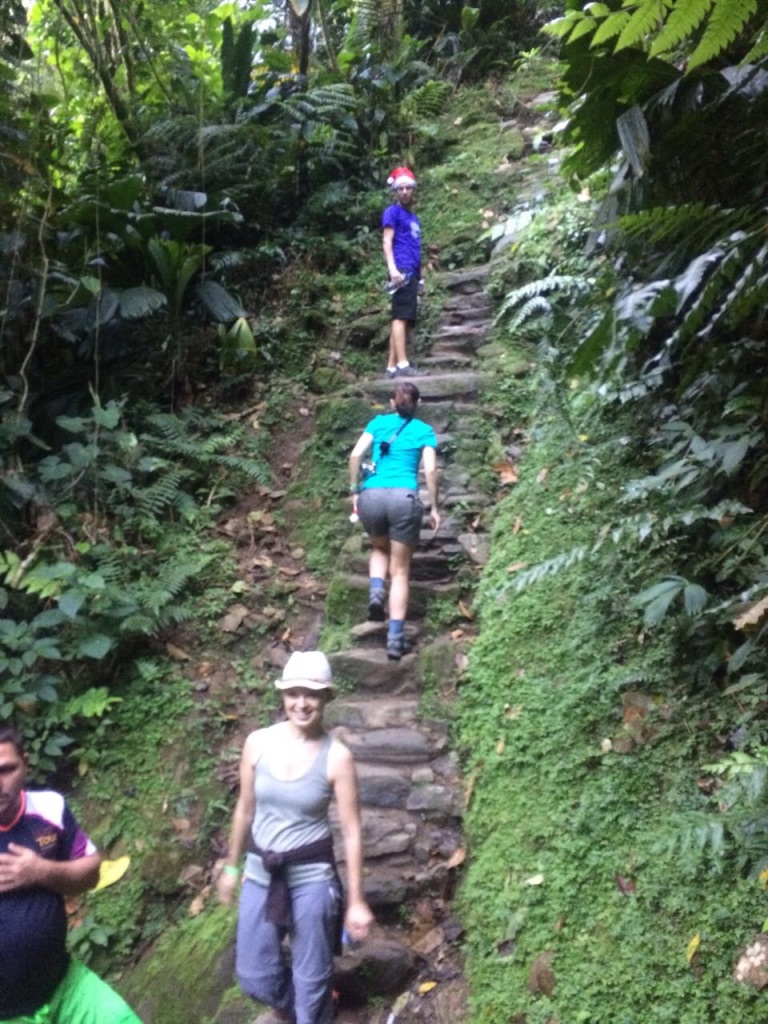 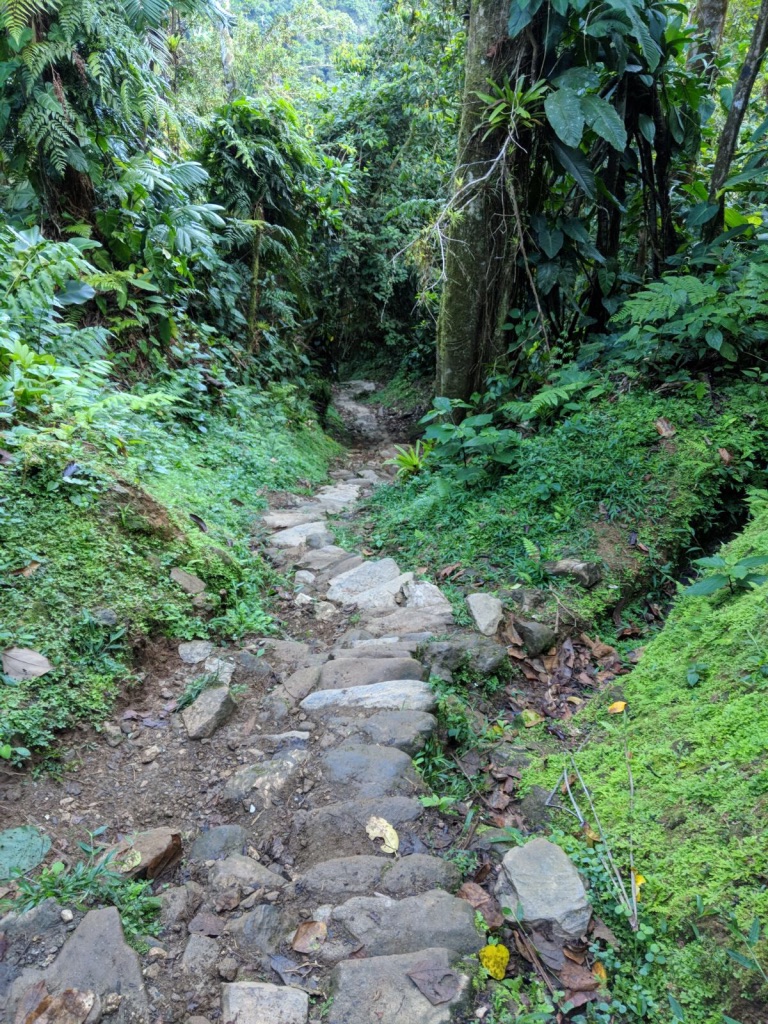 Despite
the clouds of mosquitos swarming around the central plaza, it was
breathtaking.  Looking around, you could
see mountain peaks surrounding the city, waterfalls glistening in the distance and
just a tranquil feeling from the terraces.
It seemed as if we were on top of the world. 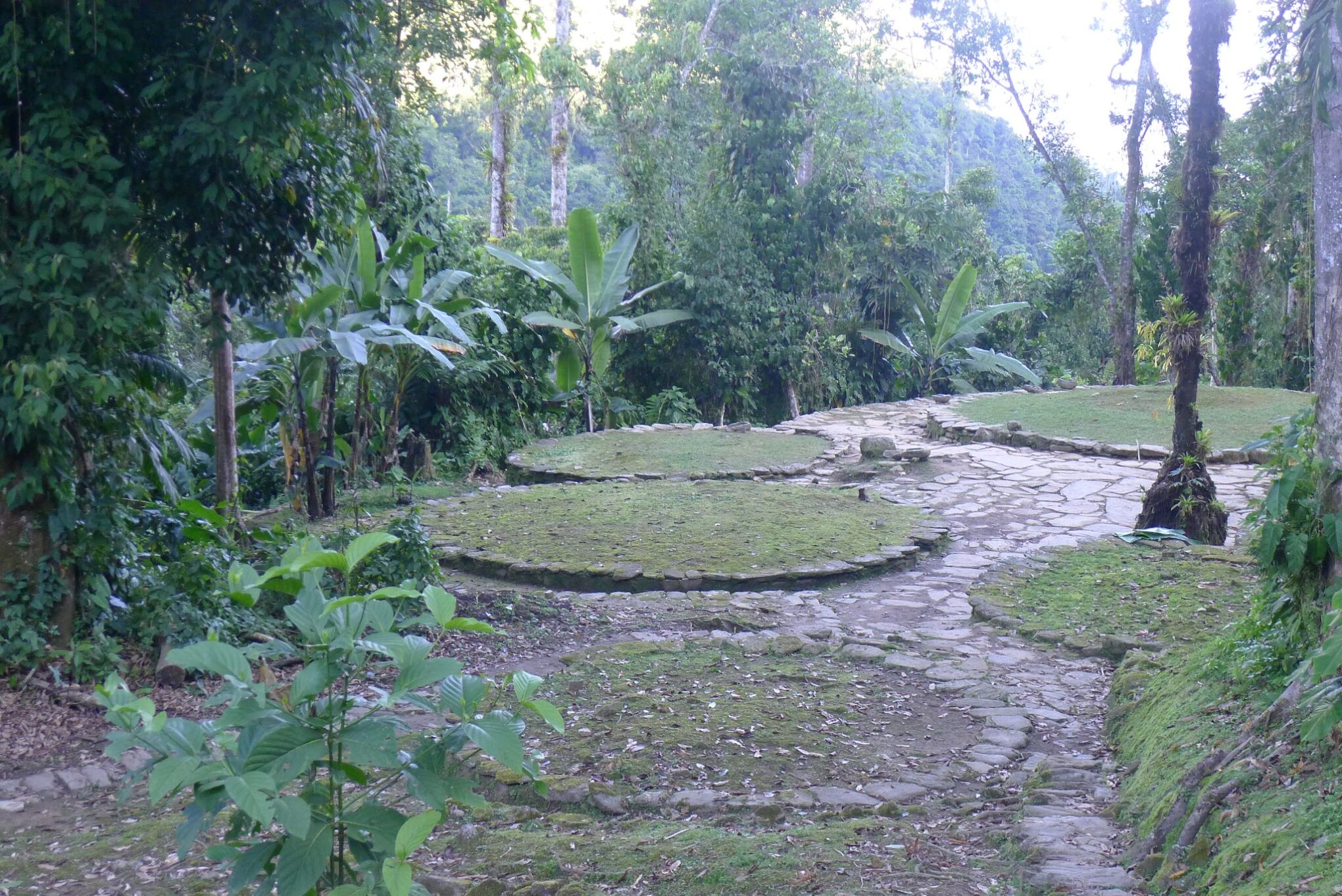 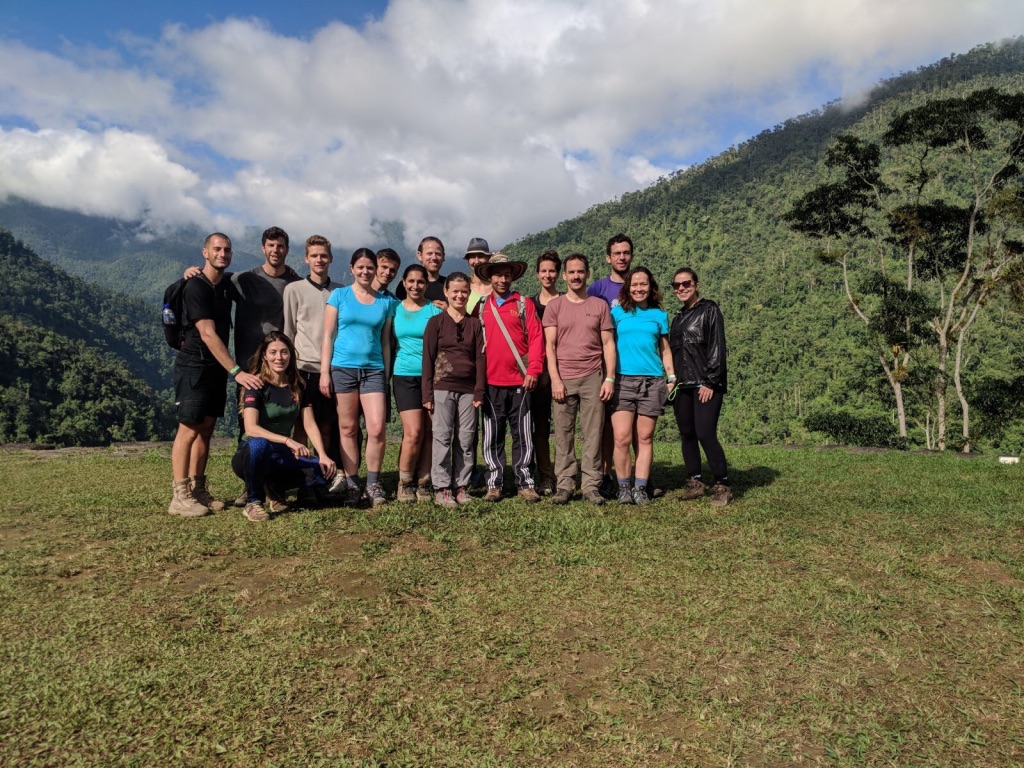 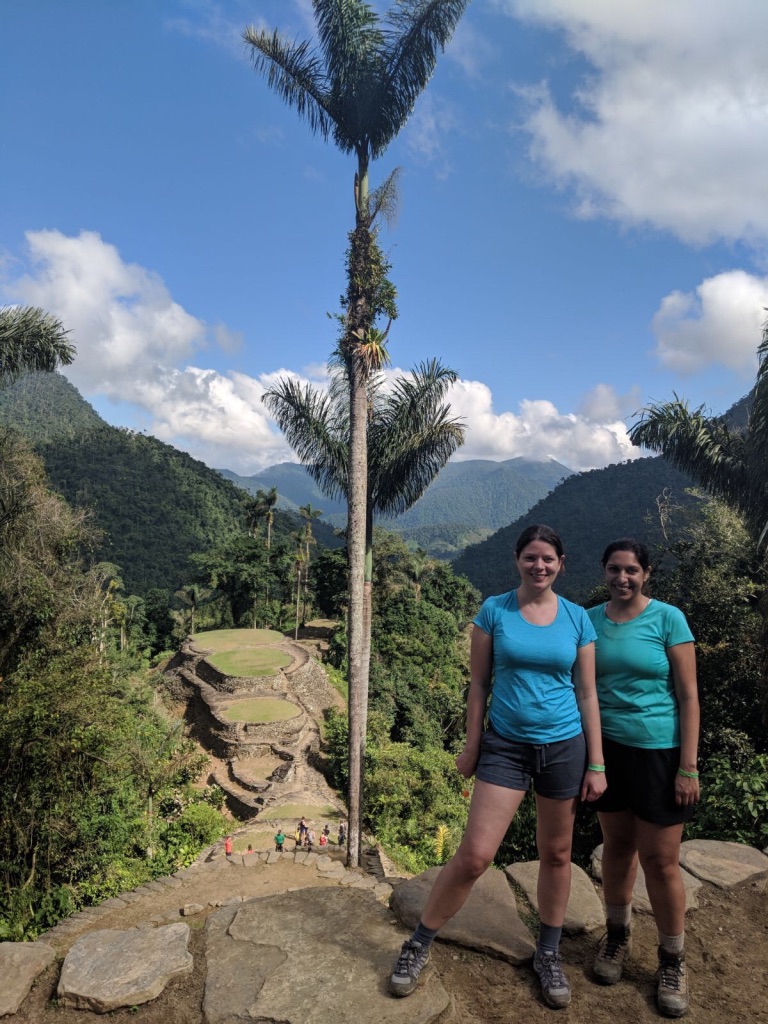 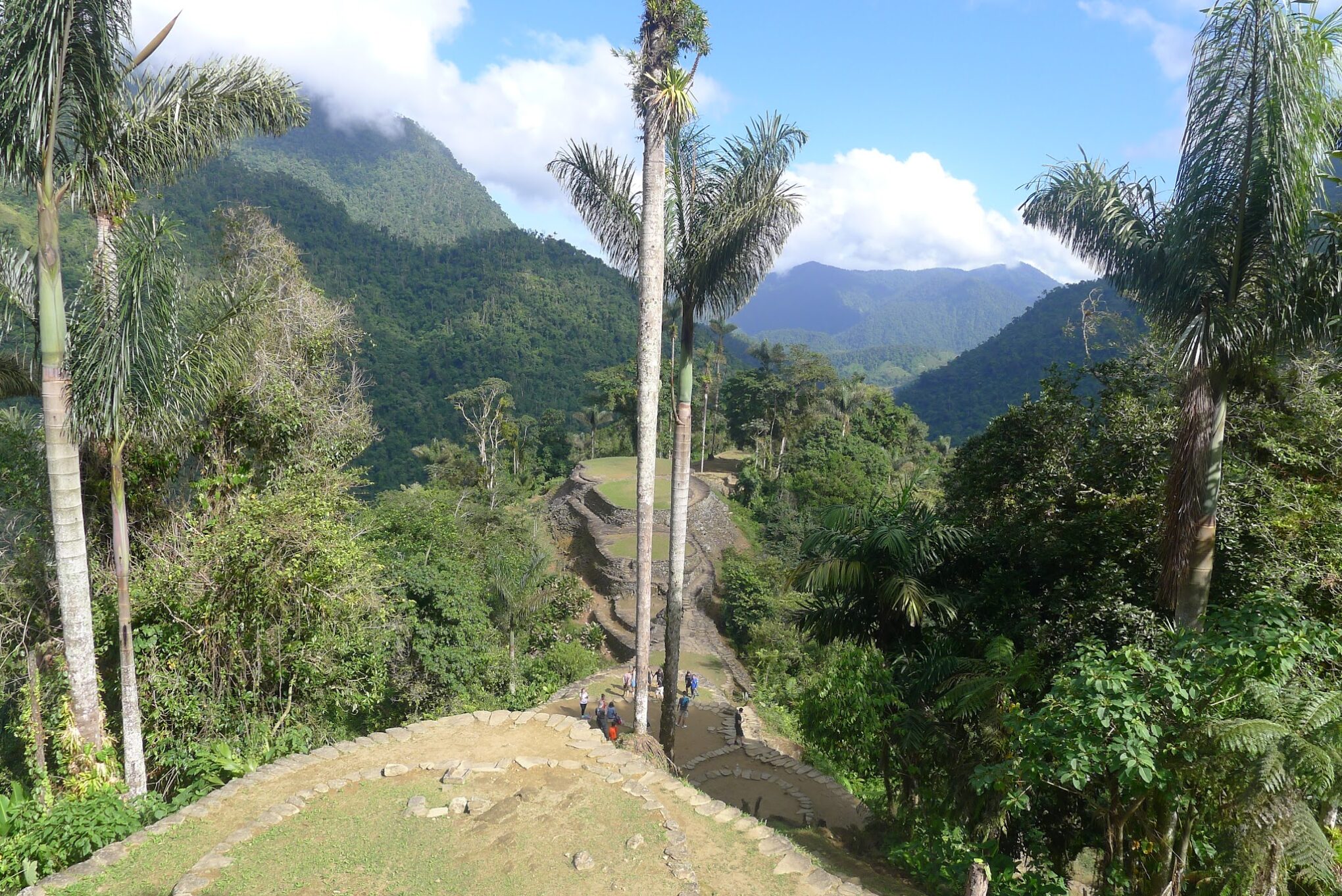 We had a a few hours to walk around and explore the lost city, while getting an education about the civilization from Gabriel. At the top
terrace, we gathered as a group and had a few sweets while taking photos.  Absolutely the perfect morning, and the
perfect way to spend Christmas! 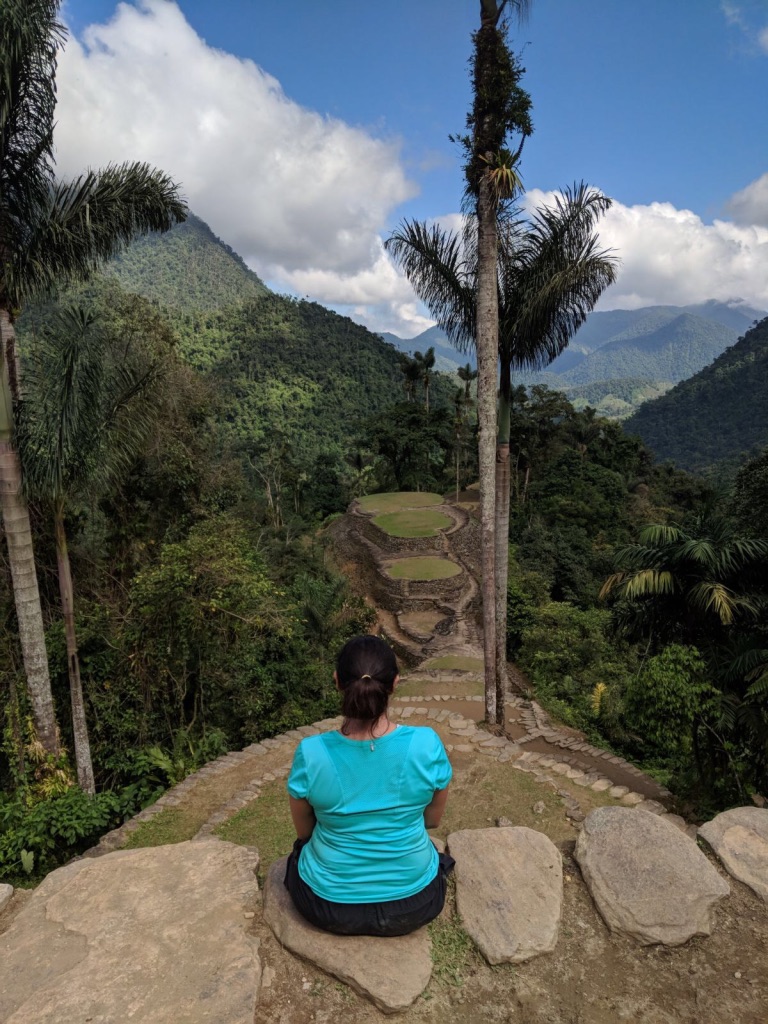 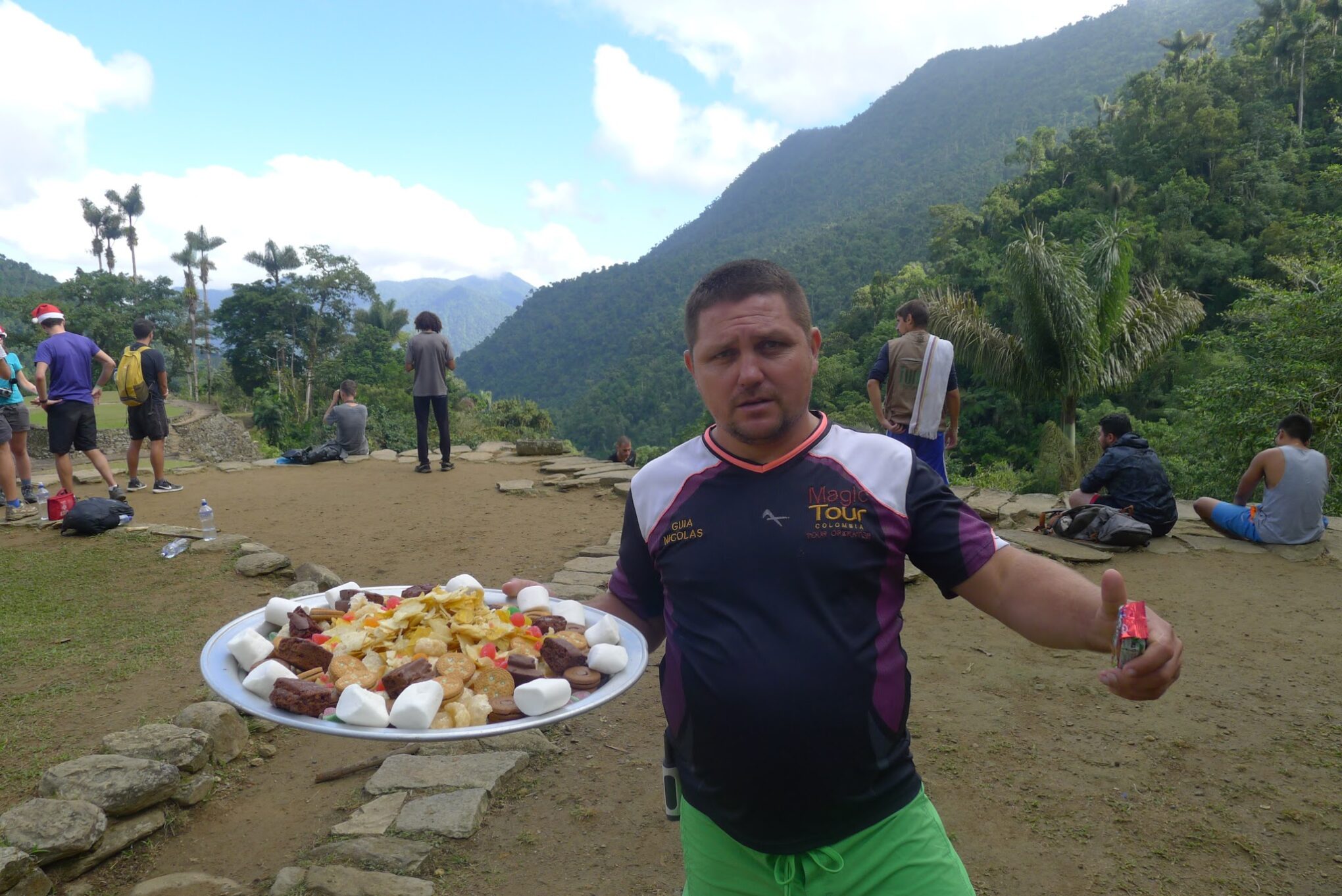 While
the Shaman had too much of a Christmas Eve Celebration, we did get to stop by
his families home in the lost city, which was great. 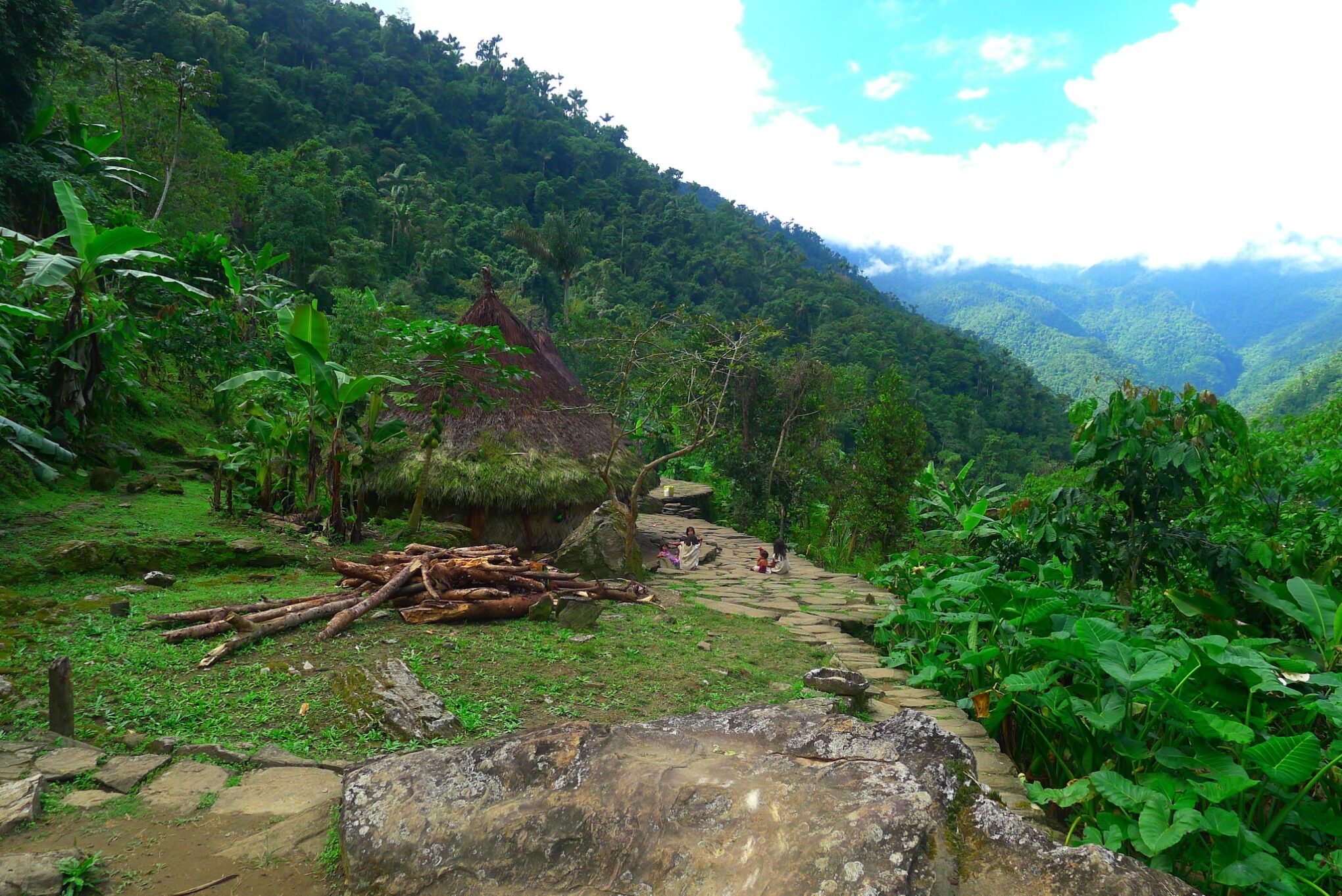 It was
then time to head back.  The actual
descend down from the Lost City was not bad – we arrived back at Paradaiso for
lunch and then set off for what would become the toughest part of the trek.

After a
few hours of climbing up and down, we got to the top of the peak and it started
pouring rain.  It was muddy and slippery,
and we needed to descend back down, cross the river and make it back to the
second camp for the night.  It was a long
and felt like it was never-ending.  In
fact, it took us quite a while, barely making it to camp before the sun went
down. 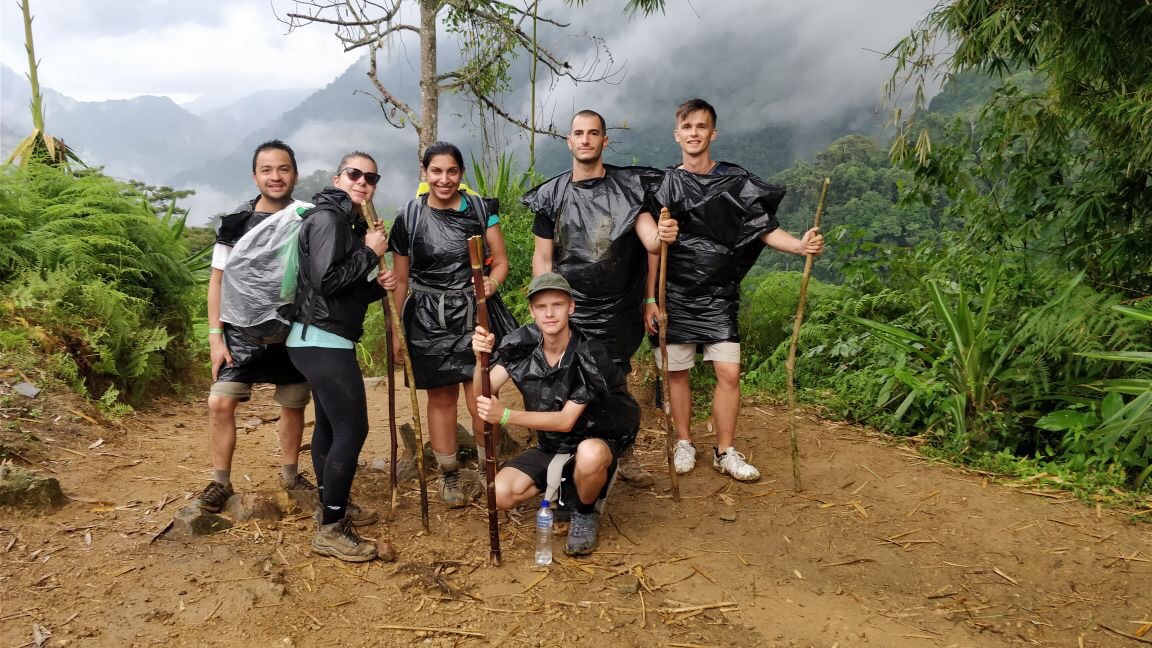 Then to
top if off, this was the worst camp of the trip – everything smelled, there
were bed bugs (which would prove later to be a major nuisance) and our Christmas dinner turned out to be tuna pasta.  Not to mention, our legs were aching from the
day.

We woke
up around 5am and it was time for a long, but final day – we needed to get back
to the first camp by 10am, and then continue all they way back to Mamey for
lunch.  It had rained the night before so
the ground was wet and muddy, but in actuality, the climb up wasn’t too bad.  We made it to the top, descended for about an
hour and then stopped at the first camp for some watermelon and cake – a little
sugar to give us the energy for the next four hours.  The terrain was varied – the last portion was
mostly downhill but it hurt my knees.  Generally, we were just ready to get back.
We were
fortunate as we had a fantastic group, and while a tough trek, an amazing
experience. 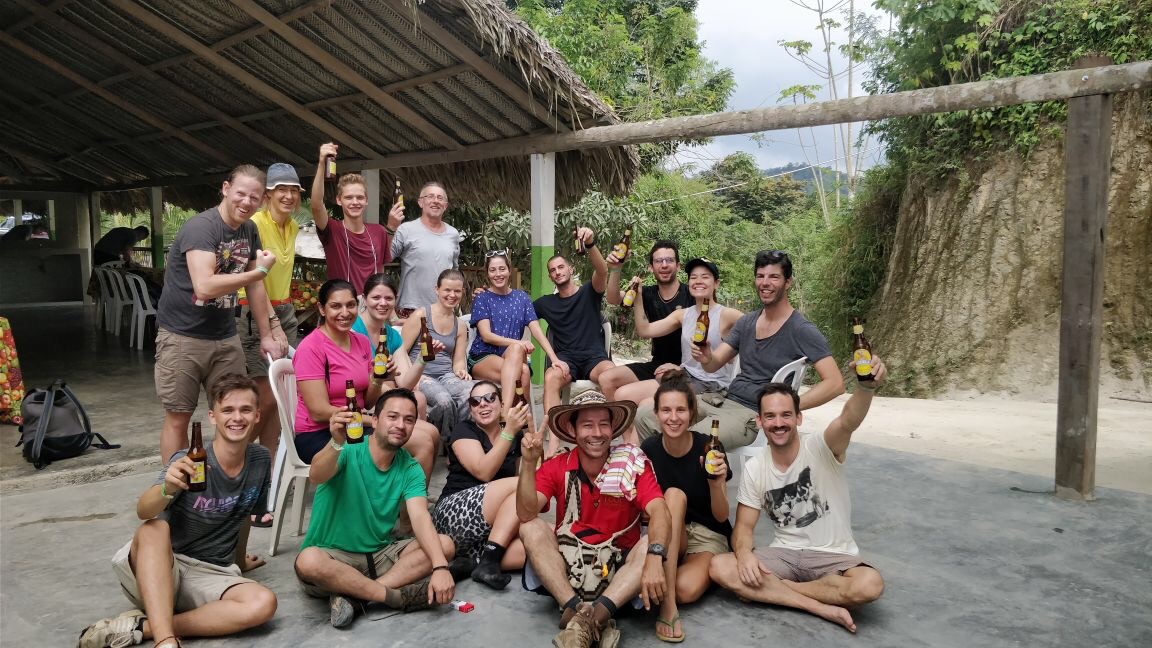 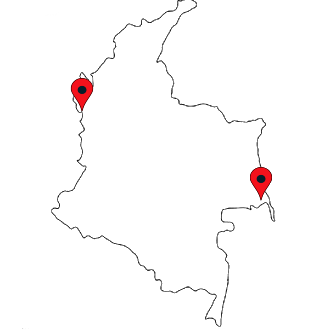 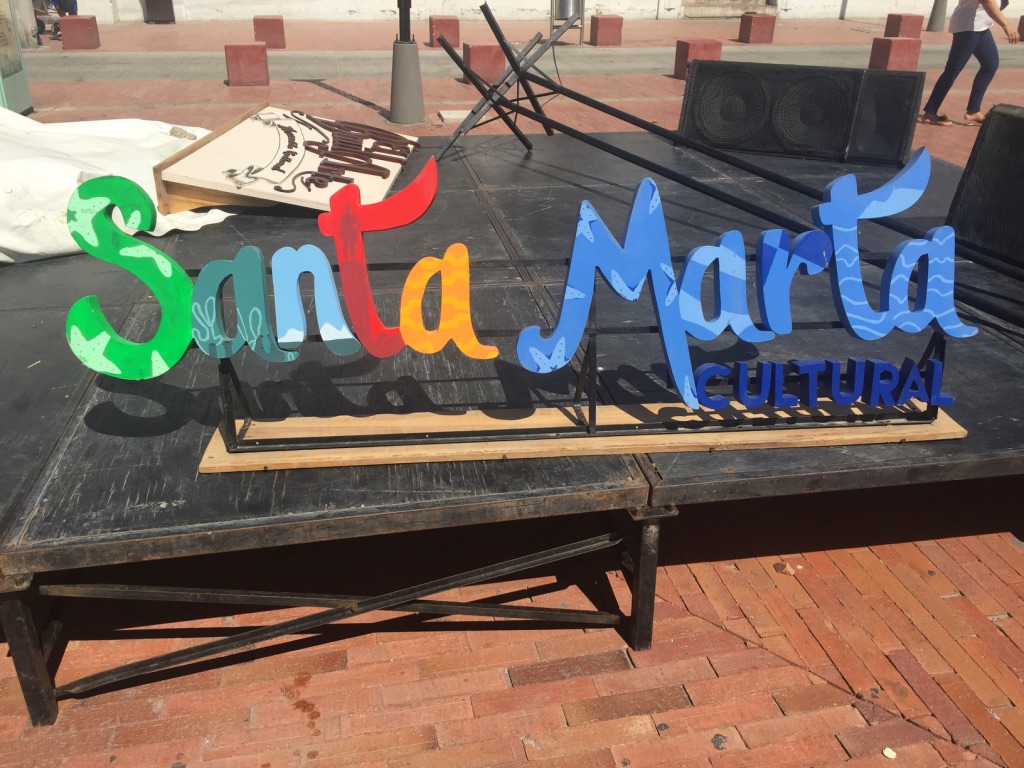 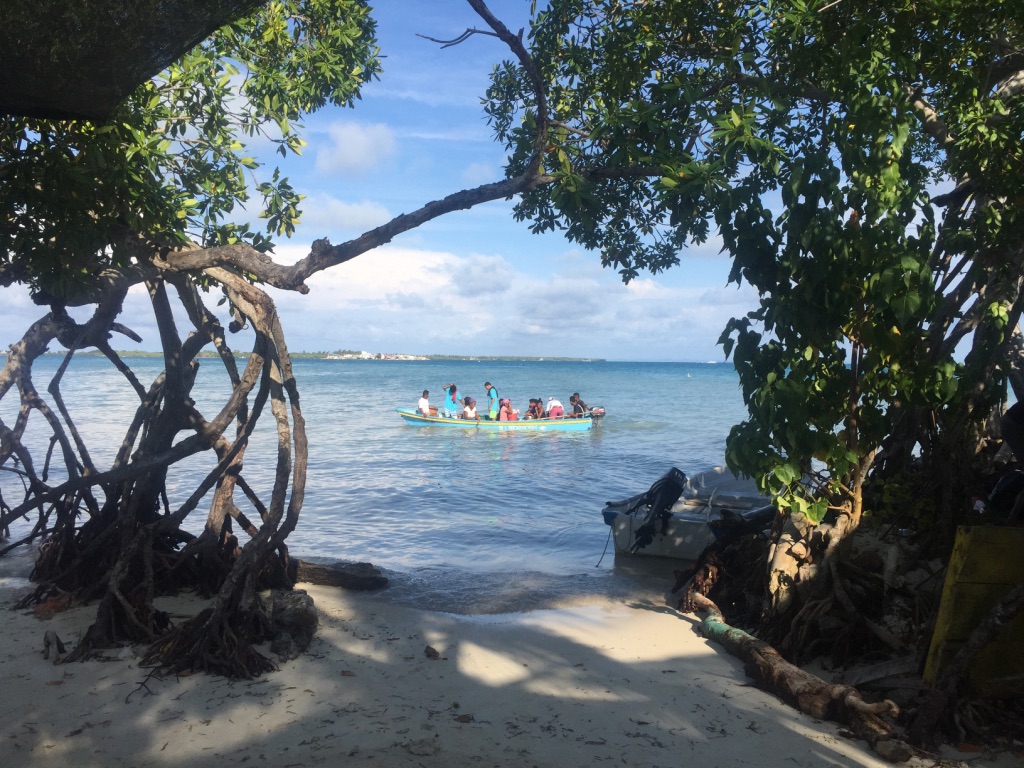 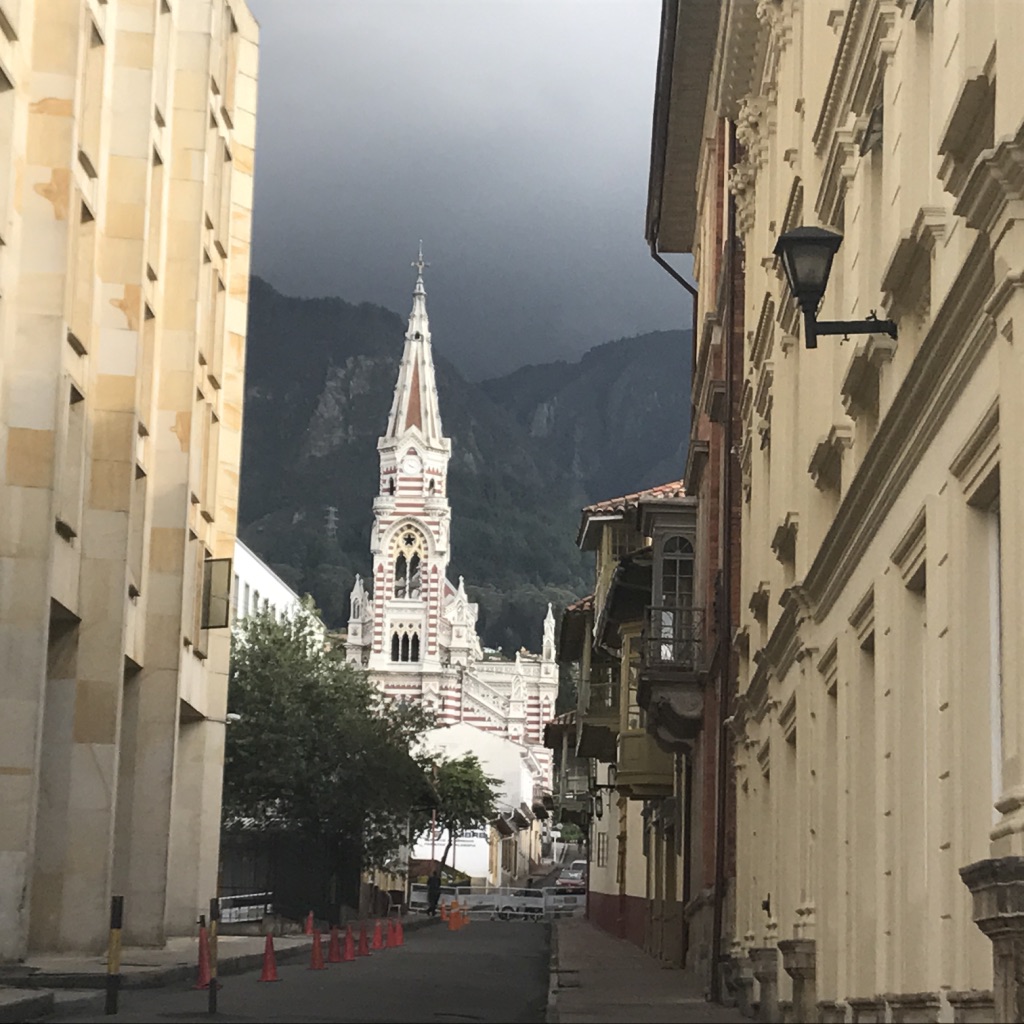 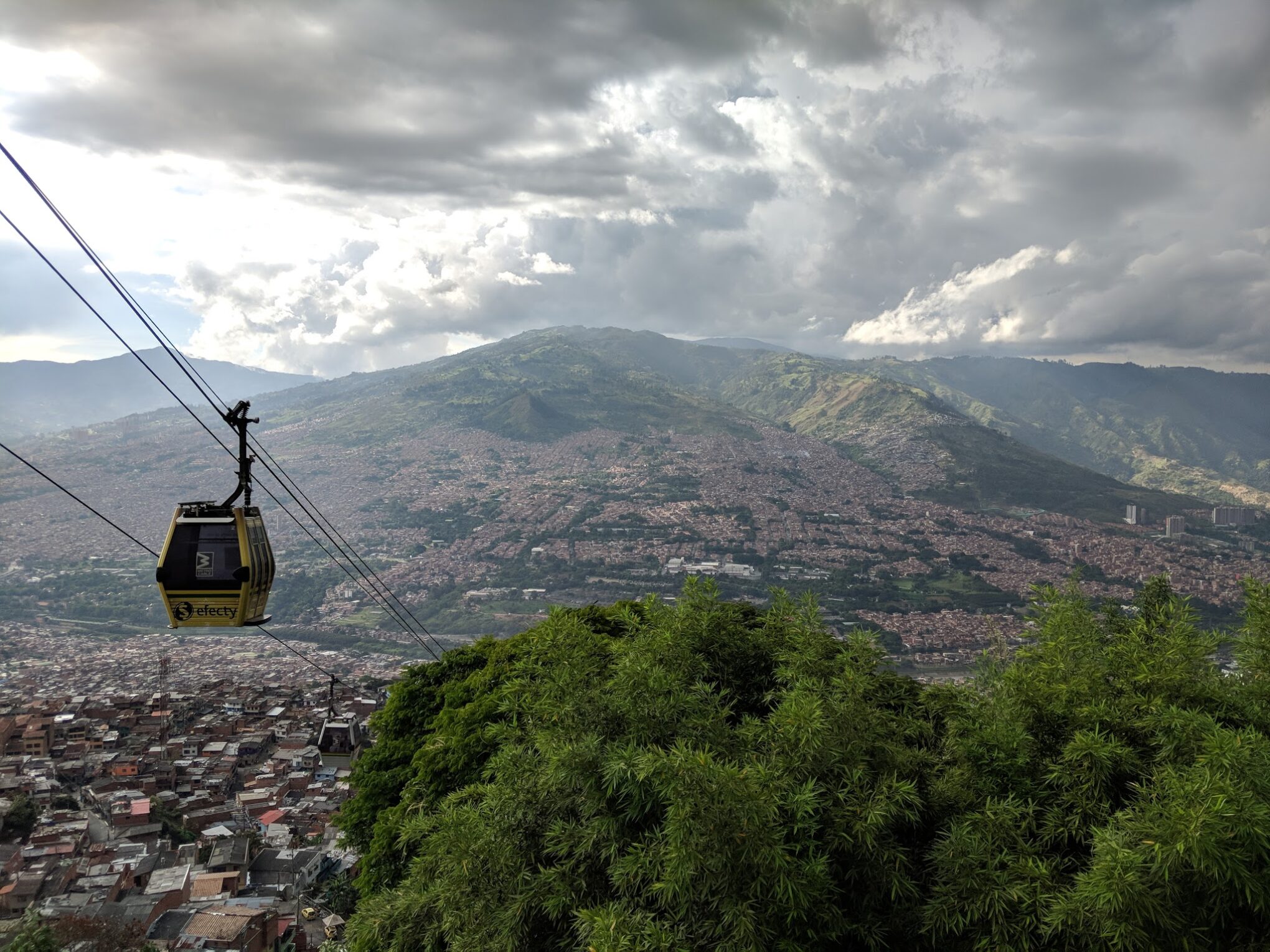 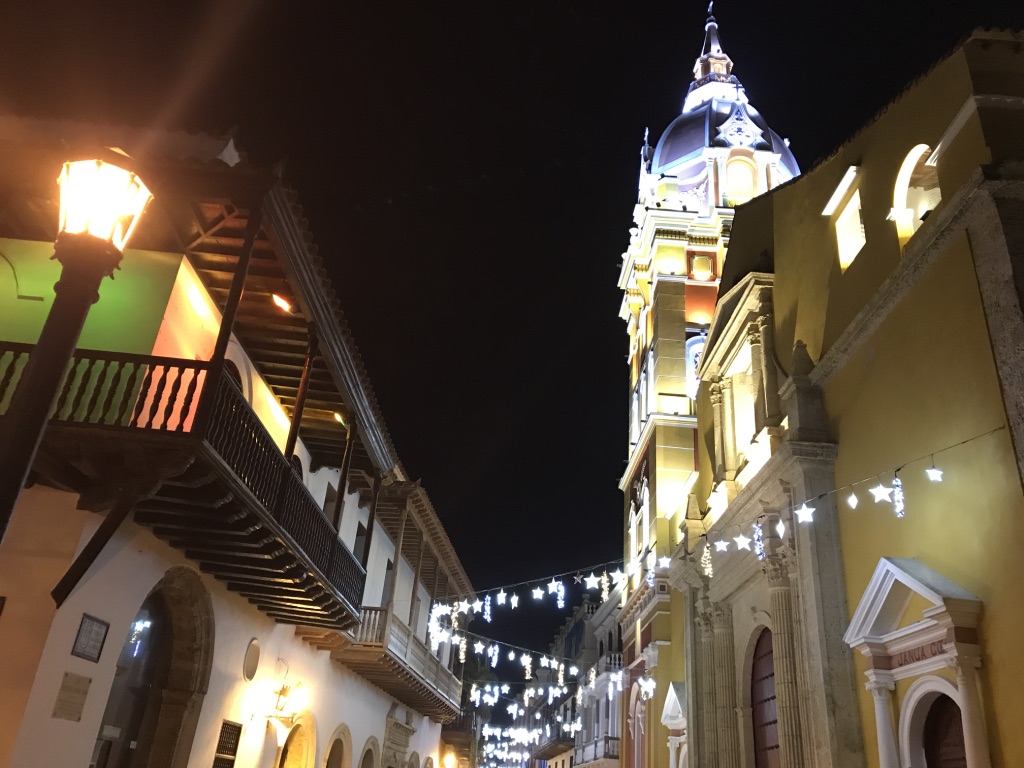